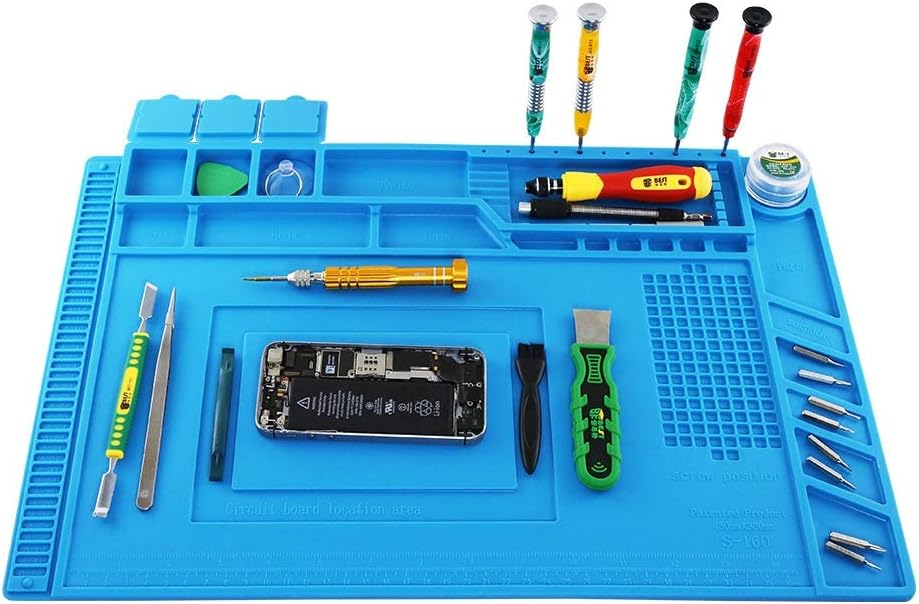 Description:
Brand New and High Quality.
Â  Features:
This Heat Insulation Pad built-in scale ruler (0 ~36cm), 124 screw positions and 3 pieces part boxes with lid, 18 notches to make your repair work easy.
This Heat Insulation Pad was made of high quality Environment Friendly Organosilicone, soft and corrosion resistant, not easy to deform, very durable in use.
This Heat Insulation Pad has excellent heat insulation performance, resistance to high temperature of 500 Â°C. Anti-slip and anti-static design, both surface and back side are adopting the anti-slip design.
There are some small sections come with magnetic (marked on the pad), and can be used to hold screws firmly.
It is an ideal product for soldering electronics assembly or electronics and circuit board repair.
Â  Specifications:
Material: Environment Friendly Organosilicone
Color: Blue
Size: 450mm/17.7'' x 300mm/11.8''
Thickness: About 5mm/ 0.2''
Heat Resistance: 500 Â°C
Â  Package Include:
1Pc x Heat Insulation PadÂ (Tools on the pad is NOT included.)
Â  Note:
1. Please allow 1-3 cm error due to manual measurement.
2. As different computers display colors differently, the color of the actual item may vary slightly from the above images, thanks for your understanding.